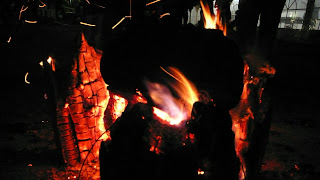 In some parts of Europe the night before Easter big bonfires of the vanities are blazing away. People bring over old wood, broken boards old trim and such. Everything wood and burning that can start the spring cleaning frenzy. That is, when there no restrictions because of unseasonal droughts. So the fire had to be a safe one, but it didn't quite burn all last years junk and crap and useless stuff we carry around. The burning also burns away the emotional ballast and gives the spectator/participants a clean slate to start spring and a new cycle of life again. Of course Easter eggs and a good meal on Easter Sunday are part of the tradition.
Posted by Tumbleweed at 12:00 PM No comments:

Knowledge is power- The Monty-Antwerp

A fun evening in The Monty in Antwerp was conceived as a training, an encounter and a series of conversations after the internet has collapsed, the libraries have burned. 60 experts who have kissed the blarney stone, have the gift to simply explain what they are about or ask questions that make one look  with a fresh eye to what one thought a bygone conclusion.  60 experts from all walks of life could be 'bought for a date': that was a 25 minute private conversation: Karel De Gucht, commissioner of the European commision, Patrick Jansen, the mayor of Antwerp, Patsy Sörensen fighting human trafficking, a fisherman from Ostend, a cosmologist explaining the string theory, a future researcher Maya Van Leemput, Bo Coolsaeet, the love doctor and a lady who came collared and runs a SM café... a soldier who had fought in Afganistan, an evolutionary linguist, a philosopher.... As stated before: 60 experts.

One could listen in to each time 8 conversations, chosen by the organisers.  Interesting, yet one could not listen to the 22 other conversations which thus became private, yet public because they were held on a stage. Interesting yet one  left  the evening still hungry... because one could not meet them all.
Posted by Tumbleweed at 3:54 PM No comments: