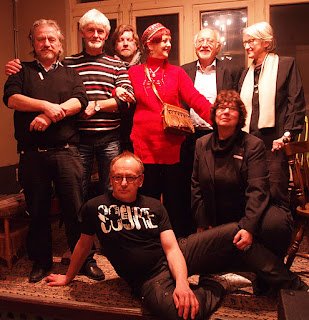 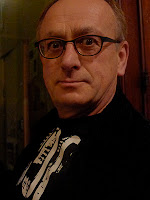 Eight poets were invited to read in den Hopsack by Frank De Vos, master of ceremony for the evening. Some people I knew well and their work, like Roger Nupie with serious poetry, poetry inspired by spirituals- rather chilling what he did with those in word and performance and lighthearted verse. 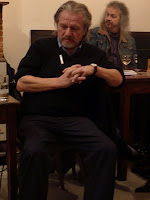 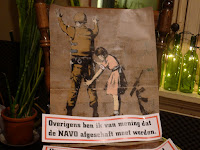 Here Frank listening attentively after having read a poem by the Burmese poet Zargana, recently released from a 39 year prison sentence for helping  the people after the flood when the government  did nothing to alleviate their suffering. Luckily he didn't have to do the full time. Also other poets were released, so maybe there is hope at the horizon...

Poets are not overly romantic souls who don't ware about the fate of the world. So at the end the words were spoken: Overigens ben ik van mening  dat de NAVO afgeschaft moet worden, in English: Furthermore I am of the opinion that NATO has to be abolished.
Here the next picture is German poet Fred Schywek, an excellent performer with great poetry, the translations in Dutch were read by Annmarie Sauer who also performed. 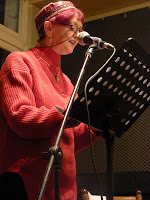 Maris Bayar in frivolous reds, read about  the sea, her fascination and love for it shone through 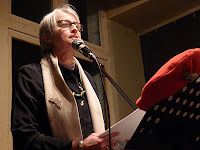 José Meyvis was the most playful poet even doing a Mahler concerto on her own on stage and perverting a recipe to a poem... 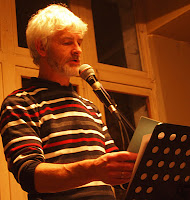 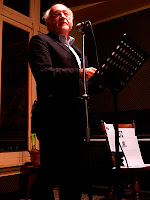 Also Richard Foqué, who writes in Dutch and English, and Erik Vandenwijngaerden did well Richard with some poems from Late Landscape and Erik with U-gedichten: You-poems.
Thank you all people from den Hopsack, always a nice crowd and good audience.
Posted by Tumbleweed at 11:16 AM No comments:

A date on a sunny day 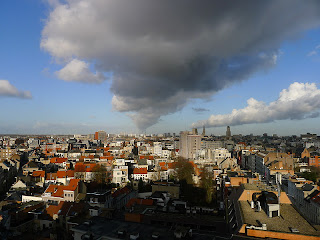 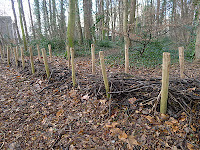 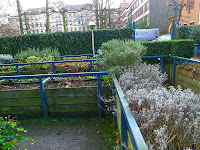 It was a nice bright day notwithstanding the threatening cloud over town, coming straight from the direction of the nuclear plant which most people here in the country think should be closed.I decided to take a walk and went to a small park I had often passed in the car, but never had walked it. It was lovely, with an adventure playground for children, an experience garden where without having to stoop one can feel and smell the kitchen and healing herbs. There is even a start of a wood-wall where all kind of critters can survive the winter. A little note explains, asking not to carry of the old wood. Once done, it will be a nice feature. 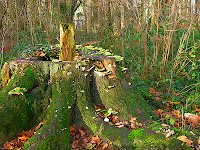 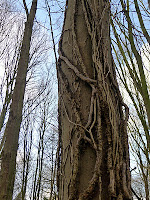 The big tree here is totally entwined in ivy. This is a parasitic relationship which can  kill the big tree, It looks lovely however, yet I'll remind not to be clinging towards other people.
The tree stump covered in fungus and mushrooms. It made me realize the beauty of decay. 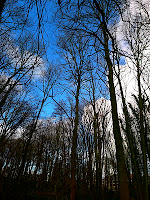 So my expedition was fruitful, I took the time to be and see, to notice, to enjoy. So, go out, enjoy the glorious light and listen to the birds.
Posted by Tumbleweed at 9:34 PM No comments:

Today 100 years ago the African National Congress saw the light. Today the festivities take place for 100 years of selfless struggle. As an interpreter I have been once or twice the voice of Nelson Mandela after he was released from Robben Island. When South Africa was freed from Apartheid, it became member of the ACP and had at their first attendance the meeting in Cape Town and were given a most moving and enlightening tour of Robben Island by a former prisoner who became a minister in the first Mandela government. It was non-violence which won freedom. was one of his messages and that the embargo gave support to the resistance because even when suffering they knew it was  because people supported their struggle. At the opening of the ACP Meeting the African Anthem was played, well known by all who had worked for the abolishment of Apartheid and this is what I saw:


Sikeleli Africa
At the first notes
just two white people jumped up
one with his left fist in the air
she with her hand on
her heart
All peoples standing
the light skinned
rose
a few notes later –
The huge hall filled with
respect
I like to think
the white people were
slow
not recognizing the music in their
soul
or just older and stiffer and
slower
I like to think
Nkosi Sikeleli Africa
is the hope that touches us
all -
Posted by Tumbleweed at 12:03 PM No comments: 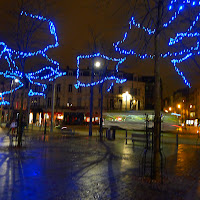 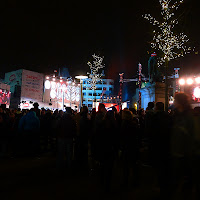 The winter blues chased away by a town in festive mood. Then having the blues can mean something different.
People mill around for a charity concert and visit the Christmas market. 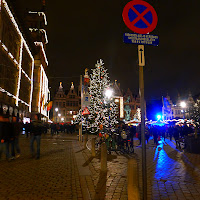 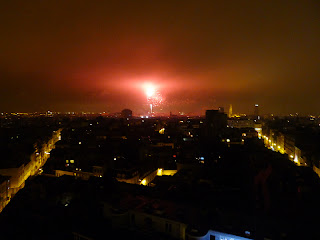 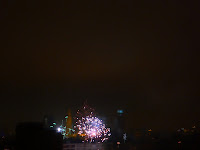 The traditional fireworks were different: the private fuses at least as impressive as the official city fireworks.  All around town the colorful flashes lit up and looked nice. At lot of noise was made to chase the bad spirits away and to hail in the New Year. 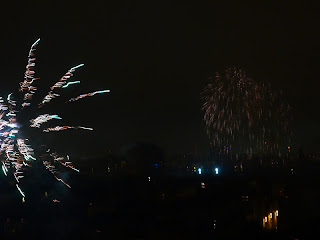 May your year be colorful and creative, bring peace and happiness to all of you. Let's practice ahimsa in word and deed.
Namaste.
Posted by Tumbleweed at 10:58 AM No comments: