The PEN conference in Krakow was wonderful. Not just because of the charm of the city, the many parks we crossed from the hotel to the Manggha which was our work venue. We met many good people from all over the world, committed to freedom of speech, committed to see to it that authors who have to flee have a place to stay in the ICORN cities (International Cities of Refuge Network) and Antwerp will be one.

Pen goes on missions to countries, often funded by Ifex. Usually these missions are a case in volatile situations. 2011 in Bahrein, 2012 to China. Ambassadors held private events at the embassies inviting all kinds of writers.
The mission to Mexico dealt with the fact that it is about Writers at Risk: authors being killed, rather than being imprisoned. Difficult diplomatic work, supported by well-known authors, engaging the local PEN-centra, engaging with the press...
Turkey was a mission with a mix that maximized the impact through working with private and public engagements. Through the public events PEN was in the press and the government did pay attention.

We should never forget that we are writers in solidarity with other writers and correspondences of beautiful letters among writers are important, even if not writing about the subject of Freedom of Expression. The testimonies were moving like C. from Tibet. He left when he was 17. He has not seen his mother since 17 years. One of his nieces was killed by soldiers, two of his nephews self-immolated as the ultimate action of revolt and free will.

The creature comforts were catered to. The sweets in the coffee breaks were excellent, lunches also taking into account vegetarians... The organization did a wonderful job. From PEN - Flanders we went with four people: Two from the Writers in Prison Committee, one for ICORN, and one who is our observer for Russia. We are blessed with freedom of speech which we should use, thus honoring the courage of the writers in prison, the Writers at Risk, and the ICORN writers. I write this in gratitude to all poets, novelists and writers...
Posted by Tumbleweed at 11:59 AM No comments:

All authors in this session had to flee from their country because they faced censorship, self-censorship. Nasrin Madaanizad (Iran) said she was just a girl who loved word and literature. When she was 11 years the teacher would not believe she had written they essay she handed in. She however felt she would be a great writer one day. Female poets were considered to be prostitutes when they would use a word like 'lip', 'mouth' or 'kiss'. As a child she burned her poems. Her first book was published when she was 17. Censorship for female writers is even harder than for male writers in Iran. So she had to flee.


Mazen Maarouf is a Palestinian writer living in Lebanon where Palestinians in exile have no civil rights, are not allowed to work. His way of analyzing everything - he has a Bachelor degree in Chemistry helps him in looking and writing. He is a poet and critical about the devisions and factions in the Middle East. Coffee breaks are very useful to for private conversations to better understand.


Noufel Bouzeboudja from Algeria doesn't believe in the Arab Spring since it was followed by an Islamist winter. Thus the region is in an ongoing revolution. The Islamic parties won the elections, thus he questions whether there is freedom of expression and whether there is a true democracy. In the school the 'new' ideology is taught.


Ali Amar from Morocco, questioned whether Morocco's status a model for the region: Journalist have problems, also in Jordan and Syria, yet they did their work and research and questioned where the power was. The kings in the region were all dictators. The king in Morocco is also the Commander of the Faithful and when 9/11 happened the reaction of the West wasn't really helpful. So all free voices were silenced. And in all this the Western Sahara Company made it possible that the opposition came together. In Morocco the 20th February movement was secular, even atheist. it is an alternative movement for civil liberties and individual liberties and was founded by two women.


Their conclusion from the debate; Revolution has to be also a revolution in the minds. Islamists castrates our freedom. It is about values and not about procedures like elections and thus the secular forces started organizing themselves as a political force. The risk is that the good things in the revolution are recuperated. The regimes use religion to maintain power. This leads to alienation since  one is not free to practice other forms of religion. The speakers seemed to expect that at the next elections the voters will  drop the Muslim Brotherhood. "It is hard to find a balance between stability and dictatorship"

About writing: Our Past is our present writing ...
Posted by Tumbleweed at 1:48 PM No comments:

Advice for PEN and Activist: IT security

In Krakow at the International PEN and ICORN meeting a seminar in internet security was given by a Syrian IT-er. That was an eye opener for me. So just a few pointers and encouragement to dig a bit further. Most people have had the same password for years and use it for all their accounts. That is not very wise if you're an activist working around sensitive subjects or if you are corresponding with people in danger.
Governments read your facebook or what it worse facebook shares your, our information with other parties and hands over your accounts. They keep deleted accounts for at least ten years. Also don't use outlook if you don't secure it. Firefox and Chrome have more security features than Safari I am saddened to say. Try at least to work over a HTTPS site. Then the message is encrypted and the governments spying on their civilians can only see who send what to whom, but cannot read the content of the message. Do take this into account and create more safety in your social networking and activism. It is not only about freedom of expression but also about privacy of expression in cases you this is needed.
In Firefox you have an add on: HTTPS Everywhere, which it is easy to install. Be very aware of security issues corresponding with friends in Syria, with writers in exile.
And, yes this one is a challenge for me as well, create a strong password, figures, symbols strange words all in combination. Most passwords can be cracked in a day or so. Yet adding all of the above it can take 996 years. And do read and understand the End User License Agreement (EULA). It will tell you whether you will be informed if a government has asked for your information.
There is more, but for most of us, this is a good start in awareness of internet security. Protect your correspondence with the people you're trying to help: prosecuted writers, writers at risk, writers in prison... writers in China.
Posted by Tumbleweed at 1:01 PM No comments:

Krakow is beautiful with the inner city being part of Unesco's cultural heritage. Rightfully so, with it's joyful atmosphere and interesting vistas.That is the ambiente in which the PEN-congress takes place. The lead question in Timothy Garton Ash's address was: How to secure free speech in this totally transformed world? We have all become neighbors, we live in a global village with neighbors we might like or not like. Yet we also live in cosmopolis where the local has become global. Thus we should not try to regulate issues of free speech through national laws and we certainly should not try to regulate it through more and more laws. Hate speech should not be forbidden until it becomes dangerous and people could get hurt or killed. That is a delicate tilting point. China proves almost on a daily basis that the Internet is not free and private powers are at work like Google and Facebook deciding what can and cannot be posted, actually exercising 'private censorship' - except in Russia, China and Iran where there is state censorship. Yet we are empowered by the Internet, posting and publishing, keeping a blog... Yet we, all the people are not 'able' to do so: they may have no food and no roof, they may be illiterate or have no access to the net and thus freedom of speech becomes a fiction. We should not be intimidated by threats because than the dictators win, and what is the heckler's freedom, or the assassin freedom. And concerning religious freedom we should respect the believer but not the content of the belief.
Embracing difference and diversity we need to speak openly and learn to live together with civility. Inherited taboo's should be dismantled, the limiting laws set up as a protection  of the sensitivities of certain groups should be abolished because then always more laws will be made. Through self-realization and finding the truth we will also find true democracy. Find the person behind the burka or the keppel. As writers we can show the lives of others to our readers and thus help embrace diversity with sympathy, imagination and caring. And yes for many authors the question still remains (for instance in Zimbabwe what is the freedom after speech...
Posted by Tumbleweed at 6:17 AM No comments:

Fourteen years ago Tony Mafia died after a life lived fully. With many friends he is not forgotten and his paintings still make a house a home. 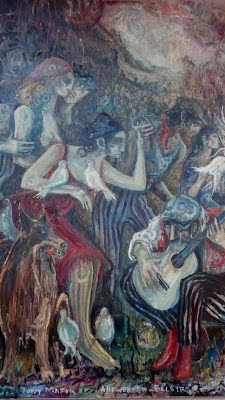 This large and wonderful painting is hanging in the public entrance of the European Parliament in Brussels. Once in a while someone tells me they have seen it.
The tearful eye of god, where not only god is crying but also the guitar player, lovers, doves and a dog and a stallion all this  one can see on the painting.


Tony loved his guitars, loved Spain had been for half a year in Casares, Andalousia. A strange place where he painted the locals as he saw them. These paintings were shown at Gallery Françoise Besnard and the show sold out. Jack Nickolson, being in Canes for the film festival, came to Paris, visited the show and signed the guest book.


Hopefully soon, I hope to organize a larger exhibition of Tony's work with the help of some friends.

The fading star
of laughter lost
hears but the
murmur of memory
on rue St André des Arts
meeting Madame Françoise Besnard
Posted by Tumbleweed at 8:05 PM No comments: