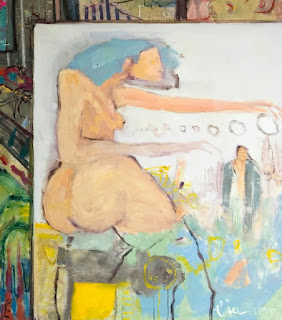 Each of the poets sent in three poems. Each poem was then translated into German by German poet Fred Schywek. Fred has translated many Dutch-writing poets into German. Some poems speak about loss, others about lust. Some write short poems, followed by a long one. Anything goes, since all the participants are real poets. Of course life goes on while doing all this. One is moving house. Another has a bad cold or a deadline for something else. But the poems got written. On Sunday night we will read all the poems to each other. Of course with a drink and a bite...
This years Buchmesse in Frankfurt has as special guests The Netherlands and Flanders from 19. - 23. October 2016. It is within this framework that the book will appear beginning of October  when the Buchmesse is on.
The Cover picture is by Tony Mafia
Participants: Joke van Leeuwen * Annmarie Sauer * Rose Vandewalle * Annie Reniers *Maud Vanhauwaert * Lies van Gasse * Annemarie Estor

Posted by Tumbleweed at 2:42 PM No comments:

The first time I met my father and my brother was after a year of interpreting for the meetings of ESSO, having saved each payment for the trip. We had flown in to Washington and the trip to Dayton was silent and long, driving through cornfields mile after mile to get to Dayton. It could have been a wild goose chase not having found a phone number from Belgium for my father. After we settled down in the local Holiday Inn I picked up the phone book. There were a bunch of Sauers... I knew my father was John A. or R. Sauer and found the number. So I called and a young male voice answers the phone. I said: My name is Annmarie Sauer, I am looking for a relative of mine. He, Mark said I pass you my father. A nice voice comes on the phone. I repeat what I just told Mark and the male voice at the other end answers: Yes, you are my daughter. I hadn't thought further than that. So I said I would like to meet you. So he gives me instruction to come to his work, He was a blue collar worker in a print factory. Jim and I and Maya showed up and had a nice meeting. He apologized for my English (which must have sounded too European or British) saying: She lost her accent... The young man, Mark had come too, and I thought: Oh, my little brother is Gay. I cherish that meeting. Years later when I was in Chloride, he called me and came out to me. So sweet... . We corresponded a while but now it is time to be closer again, seen there is another brother... I guess one way or the other we should all meet. Because no longer am I an only child, who has an only child... Although seen I didn't know anything about the child Tom, also my brother, I felt like an only child. So I am the oldest of the three of us.
Posted by Tumbleweed at 11:45 AM No comments: