Police patrol vans on both sides of the street, the military in the streets with para-commando's in full gear patrolling the neighborhood ... isn't quite something that makes me feel safe. Granted, I live at the edge of the Jewish quarter, cross it regularly walking the dog, going to the supermarket... I can't show you the pictures: it isn't even allowed to take a picture... It would be a bit intimidating if one would try. I think violence begets violence. Non-violence is the only way to live in a civilized society. Talking to all kinds of people and trying to understand the other is always a good start. Understanding the needs of an other human being makes one feel their anguish. Kindness doesn't kill. I know these words are poor in contrast to the beauty and respect I would want to share. Hate begins with exclusion, by being uncaring, unthinking of the plight of 'others'. We are all others, different and have the right to be so.
We would loose such beauty, such song, such poetry, such alternative ways of looking at the world, if we don't strive for inclusiveness.
The New years reception of the Flemish Fund for Letters was inclusive: Three writers who all three spoke a different local version of Arab talked and laughed and gave us great poetry and prose. One musician gave us foreign sounds and longings. This choice was just the right thing at the right time...
keeping the flame of hope and togetherness burning.

Posted by Tumbleweed at 10:26 AM No comments:

Yesterday I translated into Dutch a poem by an African poet and learned about the almajiri... I must admit I have also been thinking about the 200 girls boko haram took and cannot possibly imagine their life, if they are still alive... We know also about the horror of Baga.
A friend of mine, Arlette, has lived in Senegal for almost nine months and she told me about the marabouts forcing the young boys to beg... So I recognised the cruel fate of the boys in the poem... I guess it is a sad Pan-African image. I hope that once the translations are published in Dutch that tons of people will get the education I am getting by doing this work. I gain a deeper understanding. The news isn't just a snipped of news but another injustice, another violence from one human being to an other.  I learned from a friend that in Nigeria, the casualty figures from the past 72 hours run as high as 2000 dead and countless injured, several people now refugees in their own country. I guess this is what the mass murderers want, for peaceful people to be speechless. It is obvious that Europe is in shock at the barbarity of this outrage in Paris. The far right xenophobes will make some gains no doubt and there will be repercussions on otherwise innocent people, that is the human reaction to outrage. What I hope emerges from the ruins of the world as we knew it to be, is a better awareness of the evil now roaming the world. It seeks to kill inquiry, humour, pleasure and dissent. It has no sense of proportions for, if the four terrorists in Paris had access to an atom bomb, we all better believe that they would have used it. The same is true for the ones in Nigeria and Sudan.
That reason and balance will win eventually, my friend is sure of. It may take some time but reason will prevail. My friend has gone back to reading Karl Popper (The Open Society and its Enemies) and is actively campaigning for a change of government (the  president went to a wedding this weekend).
The poem I referred to:

In Sokoto‘s kitchens, ecstasy staggers the pulse
With rare legumes, ricemeal, cabbages and roasts.
Outside, suya, peppered over with panache in the false
Light of paraffin lanterns where every evening boasts

Fresh kills and the kindness of instant noodles
Served garnished with lettuce and a choice of eggs.
A youth, almajiri, receives a serving of tea and huddles
With the waiting troop, all standing on spindly legs

And their chatter continues into early morning
Going over happenings and also boko haram.
There is no consensus, a few cigarettes burning,
And each hoping to be the famous last Imam.

One does, out of that horde, become
The priapic king of that harmattan evening.
He won‘t tell the story; he has made it home,
His store of memories, his final swan-offering.

A desert‘s diaspora whispers in scattered gardens
Where plants like kept women swoon with watering
And the aseptic present bearing dark burdens
Conspires to kill the renegade seed. There is muttering

In the wake of vanished arbors, the plains
Playing dead like Sahara‘s volcanoes. Windborne
Charms are balms to the earth‘s perpetual pains,
Her stripping and rape, her hope forlorn.

We are all Charlie in the silent vigil in Antwerp

The venue for the vigil had been chosen well, in the center of town, in from of a wall with a huge cartoon. It seemed appropriate to honor the cartoonists from Charlie Hebdo in such a location A few hundred people showed up. Holding their pen or pencil, a candle, a  in cartoon... There was solemn quietness and in the sadness also joy at seeing friends one hadn't seen for a long time, knowing they belong to 'one's tribe'. Writers, members of PEN-Flanders were present and our president was interviewed. She spoke out eloquently about free speech being a fundamental element of democracy. 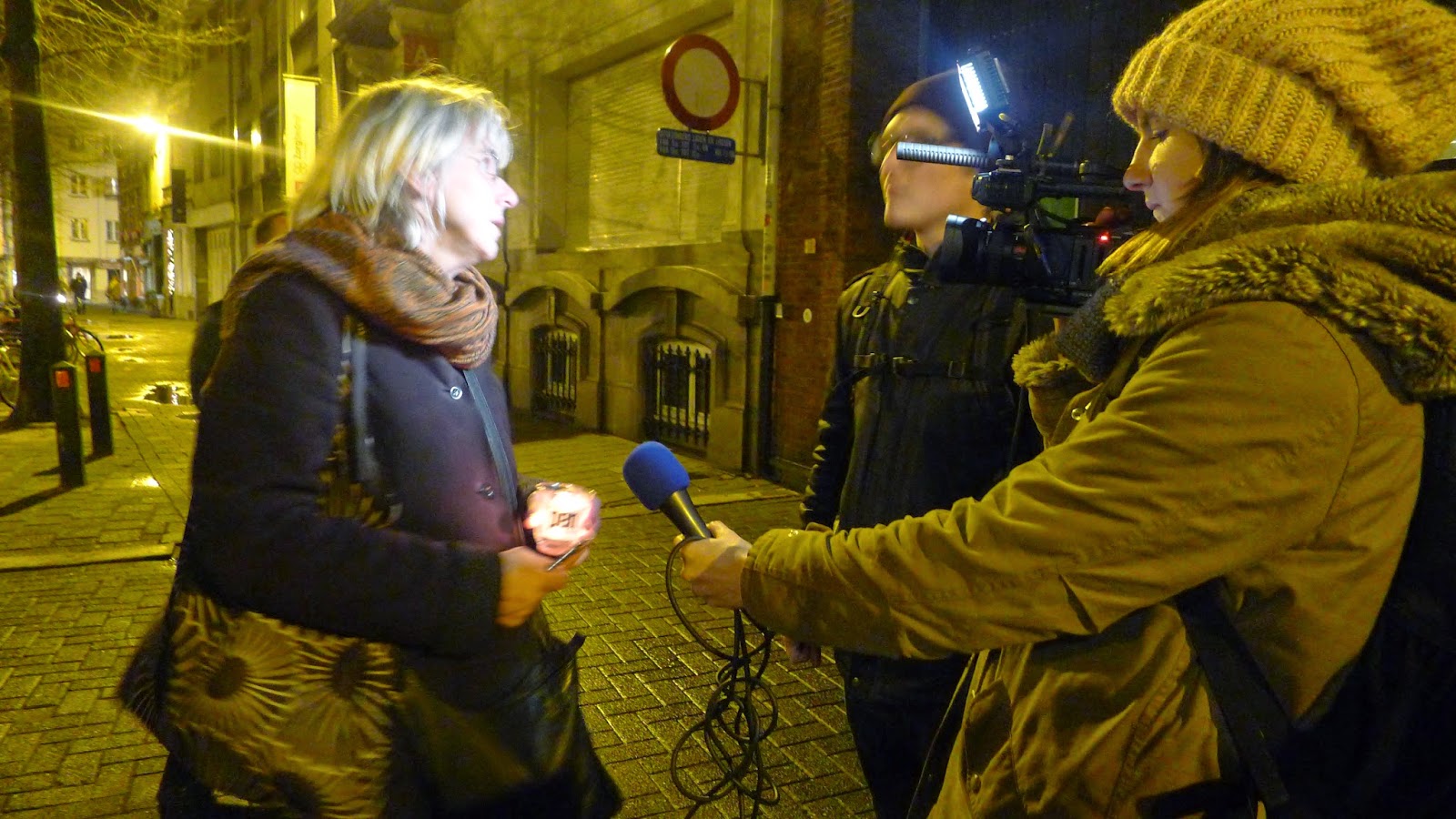 A guest from Poland was there, poets en route to the poetry café where they had performance after the vigil. It was a solemn gathering, yet one could feel a quiet determination not to succumb to fear. At the end of the gathering we left the candles in two safe places, letting the light shine in the darkness of a cold and wed winter's night. Joan Baez sang it right so long ago:

We are not afraid!
We shall overcome... one day... 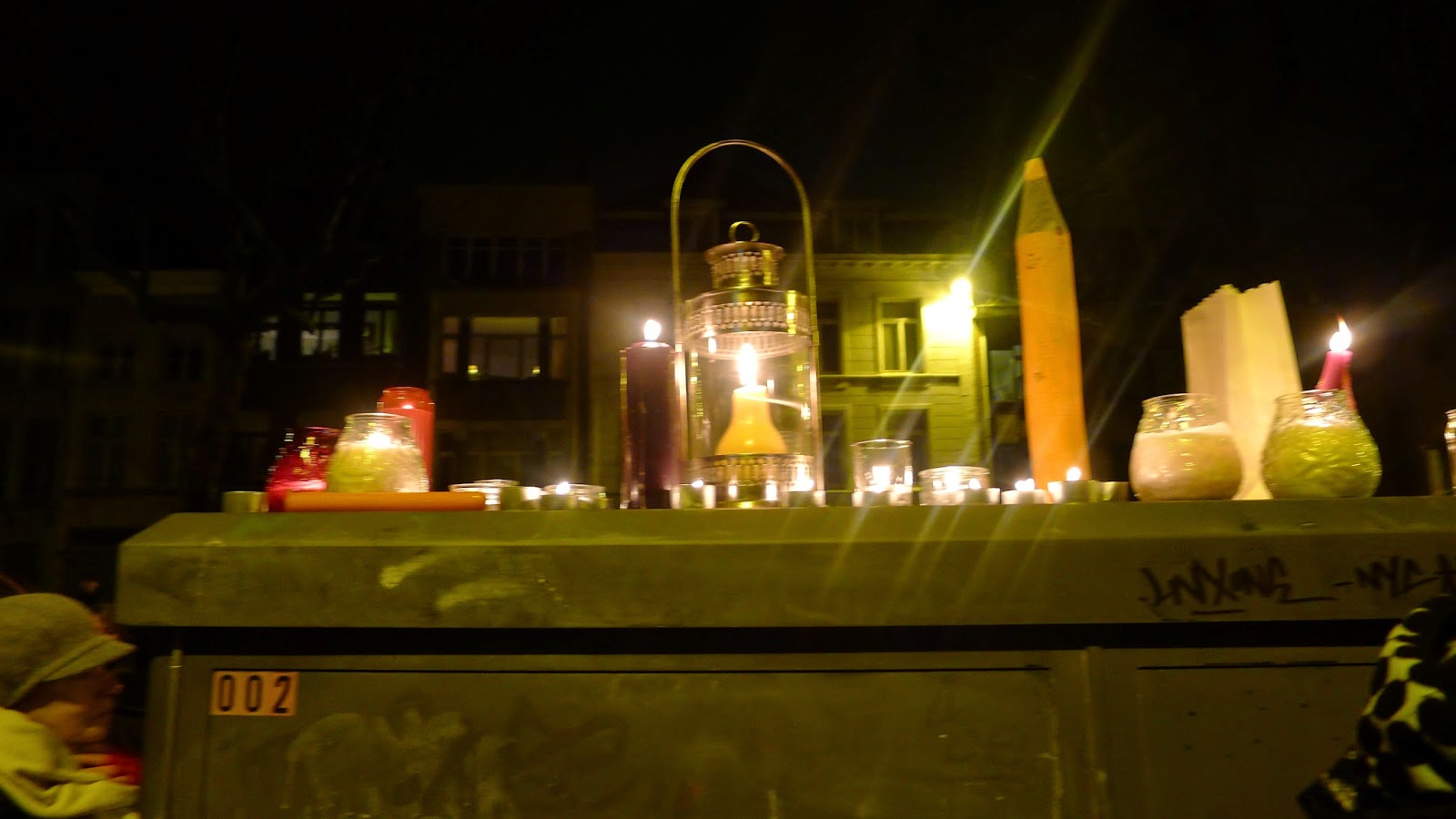 Posted by Tumbleweed at 8:16 AM No comments: 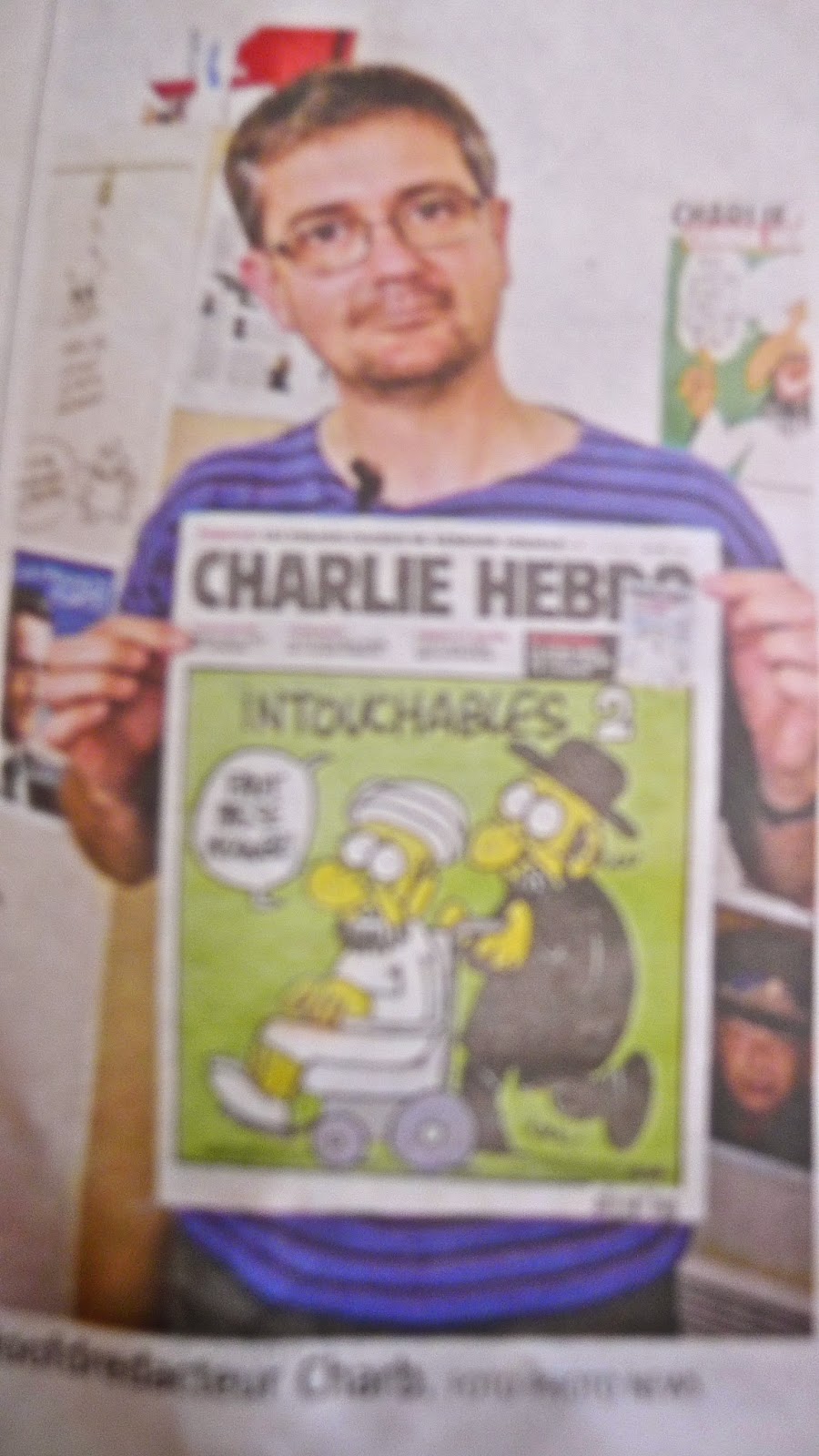 Hebdo represents. That is where the heinous attack happened yesterday in Paris. Charlie Hebdo is a satirical magazine. They use humor as their tool, they are brave and have always defended freedom of expression whether in a cartoon, or as free speech which is the pillar of democracy. When the first cartoon was published by a Danish newspaper, remember the Prophet with a turban as a bomb, the editor in Chief of Charlie Hebdo immediately published the drawing as a gesture of solidarity. Free speech is important and the genius of this particular magazine is that they had four hugely talented, courageous and humorous cartoonists: Charb, the editor in chief, Cabu, Wolinski, Tignous, Maris who is a renowned left wing economist and also the several wonderful writers and the editor and the staff where extremely brave. They did not let anybody intimidate them. Twelve people lost their life. Eight people are in hospital. 35.000 people went to the Place de la Republique to stand in silence, peacefully, respectfully in a spontaneous gesture of solidarity, showing they are not intimidated. This morning the Belgian newspapers printed a lots of cartoons, since we too have a few sharp penned, smart cartoonists in solidarity with their colleagues in Paris. Tonight there is a silent memorial in Antwerp. I'll be there in the rain, so will be the President of Pen-Flanders...

Yes: We are Charlie, we defend freedom of expression. The pen is mightier than the sword. We all will show our pen. I am member of PEN-Flanders.
Posted by Tumbleweed at 9:06 AM 1 comment:

Labels: cartoons, freedom of expression, freedom of the press, I am Charlie, Paris attack, the pen is mightier than the sword
Newer Posts Older Posts Home
Subscribe to: Posts (Atom)