The evening about world war I was part poetry and piano recital and part peace action, organized by Frank De Vos in cooperation with the district of Hoboken. In 2016, 2 million German troops stood against 3 million of the allied forces. My great-uncle Edo as a young boy in Flanders fields. Poison gas as first used on April 22, 1915. From 1915 to 1918 not only one and a half million Armenians were killed by the Turkish regime but also thousands of ethnic Greeks and Assyrian Christians.
At the piano was the amazing Billy Pletinck playing the piano, hammering it when needed, caressing when suited. The organization was flawless and during the music pictures from that time were shown in a slide shows. about the Hoboken war experience. After each piece of music a poet read his or her poem. I honor the poets of that evening and the master of ceremony Roger Nupie. Basically this was a multi-disciplinary activity: Music, photography by Hartmut De Martelaere and Goddie Caubergh and ten poets: Peter Holvoet-Hanssen presented an evocation of "The occupied city", the beautiful book by Paul Van Ostayen about the occupation of Antwerp in the forties of last century.
The poets: Cecile Van Houten, Eric Vandenwyngaerden, Annmarie Sauer, Erwin Steyaert, Erick Kila, Ann Van Dessel, Bert Bevers. Only at the end I saw how the hall was filled and that several friends were in the audience. It was a classy and wonderful night. And yes war is wrong: Make Love Not War!

Posted by Tumbleweed at 11:40 AM No comments: 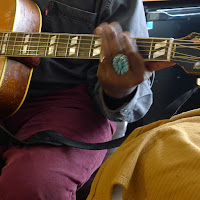 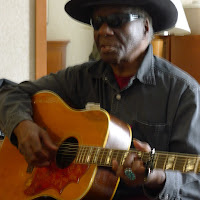 Leaving Arizona always brings melancholy since I leave behind dear friends for about a year. So I have learned to cherish my friends while I can. Yes, John and Nadine (and Otis of course who is loved and adored by my Doggy Dog.) Also Cooper and Irene, Tucker and Annie Bones.
Norris Bennet has been a friend since forever. I probably met him when I was 19 or maybe 20. He was part part of a group of buskers and artists in Antwerp. He later moved to the Netherlands, but whenever he came to Belgium he would stay at my place. Derroll Adams, Tony Mafia, Robin an Irish busker who stayed a while with Tony and me ad of course there was singer songwriter Dave Betts. Anyway, this blog is about friendship. Norris always had bad eyesight, but when I met him in November it turned out that he was totally blind. He is one the musicians of The Ebony Hillbilly's, a large all black group playing folk songs. Norris's voice always had a special quality going high and strong. Deep and warm. When I asked him how he cooped, his reply was: you have to know a lot of phone numbers by hart. So I wondered how many he knew. His reply was a few hundred. But enough of that. It was on my way back from Arizona that I decided to have a three day stop over in New York. I wanted to see Norris, feel how he is and then also Carla came with Tara. We had a nice Italian dinner all together. It was wonderful and enlightening to see how he copes. He is a great example. By the way, it was Tony who gave him the Turquoise ring he always wears.
Posted by Tumbleweed at 8:25 AM 1 comment:


Translation of a review of "Over ruggen van zalmen, by Annmarie Sauer" Published by Publisher P, Leuven, Belgium. Review by André Oyen.http://ansiel.cinebelblogs.be/archive/2015/10/17/over-ruggen-van-zalmen-sherman-alexie-55144.html#more

Quote: "Everyone I have lost/ in the closing of a door/ the click of the lock/ is not forgotten, they/ do not die but remain/ within the soft edges/ of the earth, the ash "INDIAN BOY LOVE SONG #1)