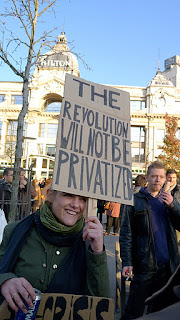 It was a beautiful fall day. Those not part of the 1% showed up in all its variety: Old politico's, alternative lifestyles, blond dread locked Rastafarian, between 7 and 10 police man in civilian clothes, at least two undercover guys and a bunch of policemen in uniform, babies, old friends, musicians, people with a tamburin, a djembe 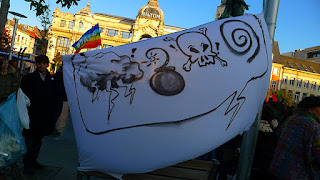 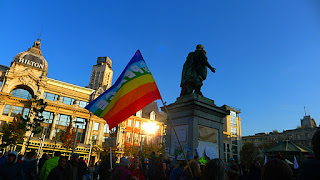 Also people showing and flying their colors, showing what is on their mind and of course a stand with badges and some vegan food. The mood was serene, warm, meeting again people one hadn't seen in thirty years when we already marched and demonstrated together. 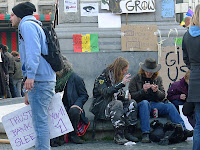 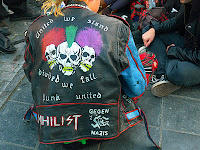 Discussion and dance, a motley crew taking a stance and for justice, for a better democracy, brighter futures for the kids, non-violent explorations of alternate ideas and a deep distrust towards the machinations and power of the corporations: in short a duty, a call for a world in which 99% have a voice.
Posted by Tumbleweed at 10:27 AM No comments:

A small park, a bunch of kids, architects and artists nice weather and a convivial atmosphere in a troubled neighborhood in Brussels. The park had been closed for a long while and was opended on Friday. Immediately a flurry activities took place. Kids made excellent mint thé, two cups for 1€, sold their mom's delicious cookies 4 for 1€, artist devised activities... 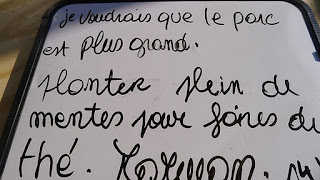 The kids were asked to write down what their wish was and the in a photomaton their picture was taken while holding the message. They played, enjoyed themselves, no screaming, no fights.

A meeting was held. The about twenty year olds, many out of a job, implore the people to keep the small park open so that their younger brothers don't have to grow up on the streets. They would like a guardian of the peace to keep an eye on the park, they would like fun and stimulating activities, so that in playing their siblings would learn certain necessary skills/ 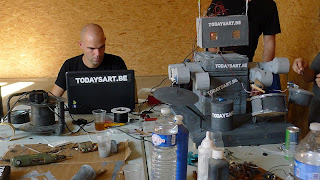 Artists presented some of their projects like a robot-drummer. Fun. It would be nice to have a bunch of them playing together somewhere in a public  space. 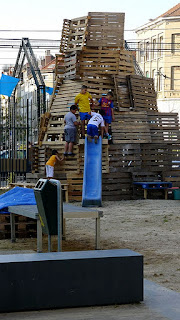 The locals build this climbing tower for the kids to play on with scrapped pallets. I was impressed by the task the guardians of the peace fulfill. They are not part of the police, they are responsible to the federal minister of the interior. They are mediators, are a presence in the neighborhood and seem well trusted. They have quite a task in this neighborhood with an impressive mix of nationalities or ethnicities: all kinds of North Africans, black African, Pakistanis and Indians. Some of the kids were three lingual speaking French and Dutch and the language of heir parents. Belgium is a strange country an the countries of the Arab spring look it how it works. There is no government since over a year, there are three official languages and the distinction North/South going through the country. The people who come and visit want to know why there is no civil war, how the Belgians do this... I think it is because people and groups keep talking to each other. Communication and exchange, sometimes heated, but it is understood to be a way of learning to respect the other and to eventually work together. All this can be learned in a small park in Kuregem/Cureghem. The local people have the key to the park for  four months, there is hope for a gentler way of living together thanks to these small scale projects.
Posted by Tumbleweed at 1:21 PM No comments: