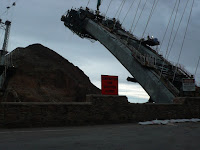 On the calender it took me three days to go from bed to bed. Friday Lady D. drove me in the morning to Las Vegas, the nearest airport that brings to were I get a connection to where I need to go. Seen the works on the overpass of the Hover dam there are delays in the afternoon. I was to spend the night at a nephew's place since no casinos take dogs, not even my well seasoned traveler. His cell phone was down; he could reach my European number... In short I got stuck and only knew of one motel that would take me and my dog, just accros of a fine casino. When Lady D 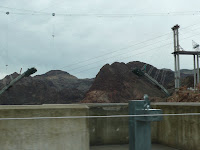 . saw the place and the strange fauna that roamed around the premisses she gave me a funny look when I decided to take the room. Spartan is the kindes word for the interior, for general ambiance lets say it was unhomely, kind of uncanny, shodilly build, dreary and desolate...(Coetzee in 'Inner Workings'). A few door down, regularly people passed and something was exchanged. My door had been kicked in and perfuncturory repaired. The sliding window didn't quite shut completely. High heals walked by at several hours of the night... At four am I had checked out and was on route to the airport. No problems. Atlata four hours waiting and Code Orange, extremely strict and harsh on companion dogs and their owners, so I go out to let the Griffon walk a bit and ofcourse then I had to go again through enhanced security. When boarded and readdy to go, we are told they found a gasleak, to take our stuff, leave the plain and wait. After three different gates, we finally get back to the seccond one and get a new plane... Airport from choppiness and storms over Canada and new Foundland, we landed safely only three hours late. My sleep quantum beginning the night before leaving my secret hide out was two hours and about 40 minutes... Monday I went to work, and still didnt sleep.
Posted by Tumbleweed at 7:15 PM 1 comment:

For today a quote from a newsletter from the Mormon Church in Utah: "If you are over 55 years old and do not plan to have children, than it is OK to marry your first cousin."
Posted by Tumbleweed at 11:18 PM 1 comment: 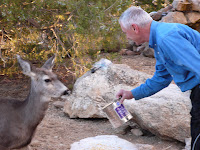 The first deer appeared in summer because Mr T and Mrs R had water out in the yard. The deer are not dependent upon the extra food but in a harsh winter with lot of snow they feel a lot better with a bit of scratch and extra alfalfa. 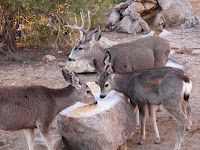 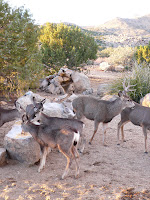 There are three generations strutting around. Young calves, yearlings and grownups. The pinion pine has to be protected by chicken wire since the deer would eat them 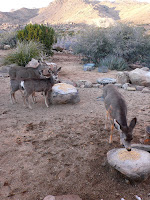 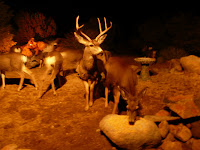 After the Alpenglow comes dusk and dark when the second team comes to eat. We sit in the dark and they let us admire them. By the way I too got fed delicious stories and yummy food.
Posted by Tumbleweed at 10:47 PM 1 comment: 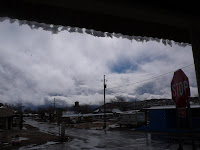 We have had weather as they call it here. First storms that make the tin clang and bang the wood, trees groan, rain and hails pelts down. That storm turned into twisters in Oklahoma. 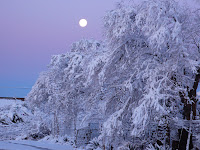 Then the frosty nights under clear full moon skies, followed by snow on and off during the day and then the steady silence of flakes covering all during the night. 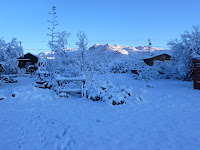 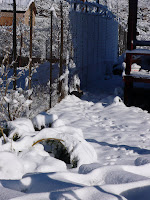 Tracks in the snow followed later by the melting water and runoff of the mountains. 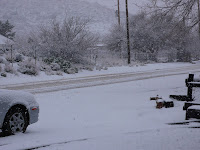 In this wintry landscape I met Joyce. Since she was a young woman, every ten years she has done something to confront her fears. In her seventies now, her latest feat was bungee jumping with her head down first. Since she has a fear of water she tried scuba diving and water skying. He has also been up in a hot air balloon and raced a race car along a race track. She also rafted the Colorado River with an 80 year old lady steering the raft. That was scary she exclaimed.
There is something to be said to meet our fears head on, then the rest of life must seem just a bit easier. But how does one even know what one's biggest fear is? How prepared is one ever for change and loss and even for the good things in our life? Maybe my fear is icy roads and not being able to roam and travel because of being locked up in a wandering mind.
Posted by Tumbleweed at 8:48 PM 1 comment: 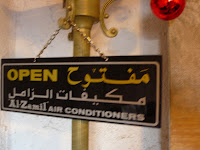 Every morning in this small town where there is no designated place anymore to have breakfast an innocent wanderer can find herself invited in the coffeehouse. it is a straw house with a domed ceiling. Strangers passing by and locals are invited in for lively conversation and a tad of gossip. 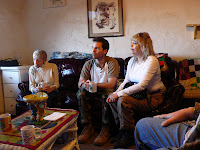 Fresh coffee is brewed, one or the other will bring home made cinnamon rolls 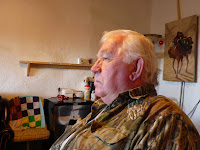 , banana nut bread or lemon bread may be your wake up treat. the lady of the house makes cookies: chocolate chip, oatmeal raisin, lemon, cinnamon, cake you name it. It is not the food, not the coffee. It is the sense of shared community by very different people, holding far flung ideas which differ wildly.

The coffee house is a sanctuary of humanity.
Posted by Tumbleweed at 11:22 PM 2 comments: 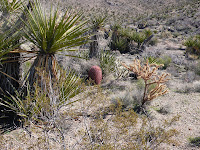 A new trail is born. Ichyfoot in the blue jacket found the place, cajoled with the authorities, got permission and designed the trail with small flags on this alluvial fan. That means that all kinds of material washed down the mountains leaving granite outcroppings. Spanish dagger (Yucca), creosote, red barrel cactus, cholla, Mormon tea... typical desert plants 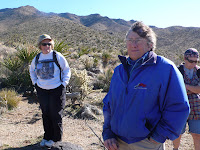 can be found in this pleasant part of the desert. I think this kind of initiative to protect the land is just wonderful. Thanks for the small canyon... 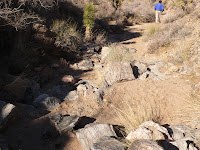 Posted by Tumbleweed at 5:12 PM No comments: