Incident during the plenary session of the European Parliament


Posted by Tumbleweed at 8:53 AM No comments:

Demonstration to close the nuclear plants in Doel near Antwerp. 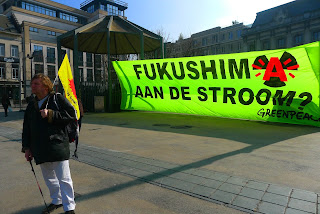 Actually when I close the bedroom drapes in the evening and when I open them in the morning I see the steam coming out of these old nuclear plants which have a lot of problems. One problem has to do with 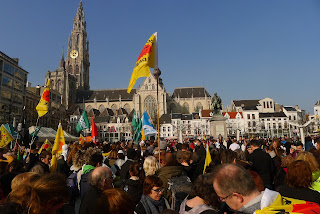 the inside copper reactor vat. There are fissures in it, some 18 cm, or 9 inch long, some open wider than a millimetre, or even two. Nobody knows exactly what the danger is. In Holland and in Germany they are preparing for the distribution of jodium pills. So where I will be from 2 o'clock on today is at the demonstration to close the plant.
By the way the plant in Tihange, near the German border is just as bad. The person at the head of Fanc gave permission to keep the reactors open till 2022 and I read in a recent interview given by the director, that if he had known all the facts, he would not have made  that decision. This is one of the reasons why we have the demonstration with participants from The Netherlands, because of the proximity to Doel and from Germany, because of the proximity to Tihange.In case of a disaster the nuclear cloud will have arrived in Duisburg, Krefeld and Cologne in under two hours, seen the prevailing West winds. It was a good gathering with a large delegation from Germany, not only working to close the local Antwerp nuclear plants I and II in Doel, but  also to shut down Tihange. Basically, I think that all nuclear plants have to be decommissioned. As Cato said in Rome, Carthago esse delendum. The plants must be torn down and destroyed. Replace them with clean natural energy.
Posted by Tumbleweed at 8:19 PM No comments:

Labels: nuclear energy no thanks

Currently I reside in Europe following the election campaign with horror at the Trump phenomenon and decidedly with amazement at the democratic campaign. When in the States I live a small rural village with about 359 residents. Only about twenty are registered democrats, myself included. I can but wonder how the atmosphere in town is with the ugliness that has been spewed by Trump. He didn't make the fortune he has, he inherited it from his father as far as I could research it. What gets to me is his hatred, his vulgar racism.The lack of condemnation of the Clan. And yet, I am not happy with what is happening on the democratic side. I would like Hillary to win. And I would like to see her take over a few good ideas Bernie has. It might be time for a female president, one who has proven that she has stamina, knows the wheels of government and she might just find the trick on how to work together with the congress and the senate. I am also astonished that Bernie Sanders goes after Obama. I must admit that I like the president a lot. I think he accomplished what he could in the face of opposition by the republicans who seemed to prefer that nothing could happen that is good for the country. Hillary certainly knows the president very well and I think she does appreciate all he tried to accomplish. Maybe this fact alone would get her my vote. I'll try and be home for early voting and go for the ride till after election day. That is to say unless the atmosphere in the country turns ugly. What is this about building a wall between Mexico and the USA? All that for a few illegal Mexicans crossing the border at their own peril? What about the poor Americans living not to far from Mexico who go there to see the dentist, to buy their prescription drugs.... Friendship will always bring me back to my old gas station.
Posted by Tumbleweed at 10:36 AM No comments:

Well, loyal readers of this blog on which I sadly haven't written too much, know that I have been working on the translation of "The Sahara Testaments" Luckily for a venture like this I am surrounded by smart and kind people. I started out translating all two hundred poems. And then slowly I realised that publishing the full translation in Dutch side to side with the English would yield over 420 pages. Apart from the translation there were many cultural references, landscape elements, even political events which needed explanation.
Frank Devos was my first proofreader, and since we worked well together we would take several afternoons and comb thoroughly trough the translations. We realised more and more that publishing the complete volume in both languages wouldn't work for any publisher. Thus we came up with the idea of publishing the three first chapters. Still 133 pages. I must not only thank Frank but also Joke Van Leeuwen, President of PEN-Flanders and of course Tade Ipadeola for having written something that managed to stay with me, something that taught me a lot about Afrika and about writing. Joke caught still a few slip ups or inconsistencies in my spelling. So I am grateful that the text is now presentable to a publisher... Tade thanks for trusting me with your text. When the translation of the three first chapters of your book is published, we hope that you can come over. It would be wonderful that for the presentation you would read your poems in English and I could present them in Dutch. I'll have to sit down with Joke and she said she would approach the publisher Harold Polis. A new player on the Dutch/Flemish publishing market.
Posted by Tumbleweed at 9:37 AM No comments: