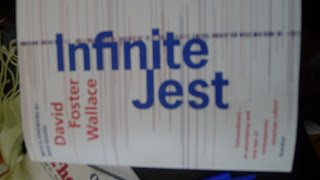 He died, no he committed suicide when he was 46. I am now 68 and stumbled upon his writing. I am an avid reader, read all kinds of things and thinner books usually find a place in my purse to read in any forlorn moment. Now I just bough two of his books (the bookshop in Antwerp only had two of his books) on offer and I went home with Infinite Jest, 1000 pages plus and 93 pages of annotations and the Pale King. No way to carry the book in a regular purse. When I started I was wondering about whether I could read it all without getting bored, uninterested or disgruntled... I soon discovered that this was writing like I had never read:rich, long winded, interesting all about the young peoples at a sports college. The language sings, the fumes of pot almost waft off  the page. The words will run away from you, will crowd you, will make you smile... Of course this is a book to be read as a young adult struggling with all that goes on in life. Yet the beauty will floor you at times:

That cockroaches can, up to a certain point, be lived with.
That "acceptance" is usually more a matter of fatigue than anything else.
That different people have radically different ideas of basic personal hygiene.
That it is permissible to want. That everybody is identical in their
secret unspoken belief that way deep down they are different from everyone else. That this isn't necessary perverse.
That there might not, but there are people who might as well be angels.

David Foster Wallace grew up in Illinois. He studied at Amherst, he suffered severe depressions. He wrote a short story about the 1983 episode. The Planet Trillaphon as It Stands in Relation to the Bad Thing." which was published in the Amherst review. Trillaphon is an anti-pychotic medication...

If it looks difficult, think of the education you'll get reading his work: the taste  and smell of a time of growing up as Generation X in the USA.

Posted by Tumbleweed at 5:39 PM No comments: