Why did I go to the occupy activity in Antwerp and why do I support it, I have been asking myself. I guess because it is a moral movement, it is not about practical demands. It is a joined dream of people who feel that in society we should care about each other, that the values reach far beyond money and assets and ratings, things that are so important to the 1% who hold so much power. I think the Occupy is about acting responsibly, towards each other, towards nature, thinking about ecology and non-violence, thinking and trying to live real democracy. Targeting nuclear power, resisting the transports of nuclear waste in Europe, it all stems from the same source. And yes money should be questioned, money and its use: for now in most countries the money factor is a huge element  in elections.Of course the police does not defend this basis democracy, but uses violence, brute physical force. But remember 1% is not 'We the people".
Posted by Tumbleweed at 9:11 PM 1 comment: 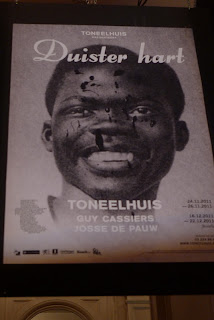 I love the theater, I love monologues and Josse De Pauw is one of the real good ones. Guy Cassiers is a formidable director who with seemingly meager means visible on the stage manages to evoque an array of moods and situations. If you have a chance to go and listen and watch and feel, don't miss 'Duister Hart'. 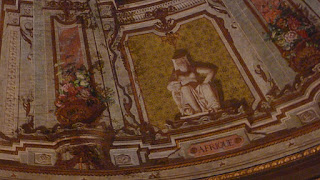 I also love this particular theater, the Bourla, with its ornate interior: the sciences and the continents are represented on the ceiling. This monologue is written by De Pauw based on the excellent Dutch translation by Bas Heijne of the novel Heart of Darkness by Joseph Conrad and deals with the Congo and a trading post where Kurtz gathers the most ivory of all the agents. The language is rich and at times chilling.

A good crowd showed up to listen to this monologue dealing with colonialism and the effects of greed and loneliness, the loss of a moral compass when one has nobody to talk to and the horror, the horror when looking inward at the state of ones soul. One will recognize the final scene as used by Francis Ford Coppola in Apocalypse now.

Kurtz has plundered the region, has been a violent and cruel representative of the firm, yet he is remarkable, intriguing, imposing, awe inspiring violent and even lovable man. The story is told by Marlow the Captain of a ship sailing up the Congo River in Africa for a Belgian Company. His goal is meeting Kurtz, who has been member of an international society to abolish rude manners and customs. Yet in Kurtz he meets a dark heart, without moral references or control. Josse De Pauw plays all roles thanks to a state of the arts technical approach, projecting the roles that have been  'taped' before and sometimes in the dialog, the actor on the stage is filmed and projected on the projected screen. Thus the meeting with Kurtz, becomes also explicitly a meeting with himself. One wonders why the company never intervened when they knew about about the plunder of the land and the violence against the indigenous inhabitants. The only reason would be greed, in other words capitalism and colonialism. Yet the play leaves one wondering whether one could lose one's own compass.  Great art is food for the soul and food for thought. When the thin gilded layer of civilization is scratched away all that remains is a dark heart.
Posted by Tumbleweed at 2:56 PM No comments:

Funerals and the celebration of life

In the span of a few weeks I attended three funerals and in this misty November it made me pensive. I learned from each of the services, which all three happened to be non-religious memorial services. In one case, I saw the person as a gruff, a bit rude, uncompromising, self-righteous man, yet I learned how he doted on his wife, how he was a kind father and kinder grandfather still, always preparing fun and grand holidays involving boats. In the second funeral, the character of the man shone through in the music his wife and sun had picked out. An ardent tango - they did dance together for years - spoke of the kind of love they felt for each other. And two rather irreverent songs about life and death and yes, it was in keeping with his mentality. I also learned how much he had been there for other people. And the third, a brother of a dear friend passed. The speakers were friends and the family, not professional speakers. Two different personalities emerged from the memories people held dear: from a cantankerous contrarian, who loved jazz and loved discussions. The heartfelt thank you was: thanks for the headwind you provided. And then out of the family's words there emerged the kind, attentive uncle or brother and brother in law, protective of those he loved. He used his stubbornness trying to beat the odds and his sister said: I couldn't have wished for a kinder, better brother...
Goodbyes are hard. Pain mixes in with cold of night and yet life has to be celebrated, their life and ours.
Posted by Tumbleweed at 1:58 PM No comments: 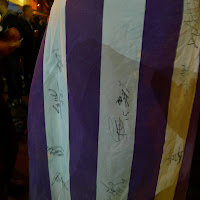 My interest in sports has been minimal, although I must admit that last year during the world championships I have seen most matches. And enjoyed it. So when a friend asked to come and join him and a bunch of his friends for a local premier league match Beerschot C A against Mons, to his and my surprise I said yes.
It will be clear that I'll never own a club flag signed by its players like the young boy who wore this flag around his shoulders. 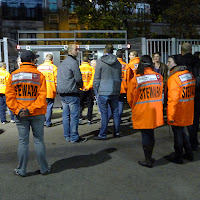 The stewards did a good job, but it was a quiet crowd. I must admit that I did really enjoy the match. Being in the middle of the event going on, hearing the comments of two tifosi on the bench behind me and from my friends was enlightening. I enjoyed the sounds: the chants from the supporters,, 10 % behind their team but with respect for the adversary of the day. I enjoyed  hearing the thud from a foot hitting the bal hard, something I never heard on TV. The game seemed slower than what I had seen on TV, yet when I saw the  highlights on TV the next day, it seemed not so slow after all. 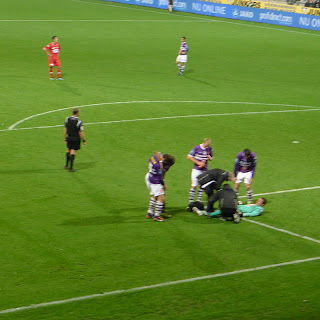 The home team Beerschot won 2 to 0. I learned that different players have different qualities and that the best man was the goalkeeper from Beerschot. I also  realize now how easily a player can get really hurt. In other words: the evening was well worth going to het Kiel for, to the former Olympic stadium. And this not only for the after party in the hall of fame.
Posted by Tumbleweed at 9:03 AM No comments: 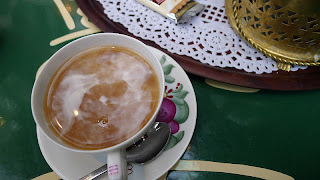 Being on the road and in Zwolle for the presentation of  Verbrande schepen by Paul Gellings on the Cultuurboot, it seemed a good idea to swing by Emden. My maternal grand uncle hauled  from there. Every morning he used to drink  Ostfrisischer Thee. A special mix, black and strong, they would let a child drink. So finally, I had my first, extremely delicious cup of East Frisian tea.

He also used to sing 'Where the seagull scream'...

Now I realize he was probably homesick for his pretty, friendly town. Old firetrucks on show and ships moored right in the middle of town, good food: what more does a tourist want. Shops are open on Sunday afternoons so even then you can get some tea to take home. 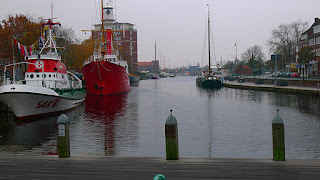 Posted by Tumbleweed at 3:51 PM No comments: