When my mother was sinking away, loosing herself from dementia, she lost language and the simple daily actions. Yet her bread had to be prepared. Sometimes she needed to be fed. She rebelled against that. She became dehydrated because also she didn't want to drink. Thus she ended up in a hospital where they flooded her with intravenous fluids. She was more alert, more conscious of her surroundings and the people around her. When the doctor explained what was going on he used the phrase that she had "terminal dementia". Since I didn't understand what that was, I asked him. His reply was that her brain no longer could tell her she was hungry or thirsty. Thus she didn't want to eat or drink, keeping her lips tightly closed. Refusing anything to eat. I had one day a last conversation with her. She was trying to say something, made some noises that were no words. I was intend on giving her a rely, but knew not what she meant to say. Thus what did the former interpreter do: I changed the sounds she made just a little bit. We kept it up for about ten minutes. I'll never know what we said. Maybe the only thing that counted was the effort to hear her and to try and understand how she felt. Just a few minutes later she knew no longer who I was.
I have a fond memory of this bizarre conversation that brought us nearer to each other, even not knowing what we said. I guess the connection was what was important to both of us.
Posted by Tumbleweed at 7:01 AM No comments: 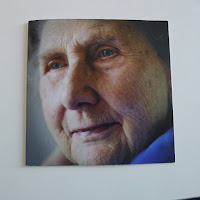 After a period when she tried to hide that she often couldn't find her words or didn't remember how to do simple household tasks, she slipped away into not eating nor drinking. Whatever her husband tried, she would not open her mouth. Part of it was the struggle to get her dentures in. So after a while they gave that up, and softened her food.
But it was not going well, she lost weight, was often sad, since she didn't know what was going on. And she got dehydrated. When in the hospital the gave her intravenous fluids and she perked up, was almost her old self again, spoke a few words. But when she was back home it was obvious that the home care wasn't enough for her
anymore. She was brought to a nursing home in Brecht, where she passed away. The phone call came a bit past midnight since they couldn't reach my stepfather.

Posted by Tumbleweed at 7:00 AM No comments:

What I found out or was told: Great-granddad Cooper was an Irish blacksmith who worked for the Yankee's during the civil war shooing their horses. One day they came upon an Native American Cree camp. One lady was working very hard and was not treated well. So Cooper took her back to Dayton, where she had eight children. It was always cozy in their home with the fire on for the blacksmithing. The first one to be born was our grandmother to be. At least that is what I could coble together or was hinted at by our mother. There must have been a Cooper too? But I wouldn't know how he would fit in... I think you know more about the family tree than I ever did. Our mother was full of secrets... She must have expected something else when she married our father John. She probably dreamed of an American kitchen and a washing machine or a real fridge and not a zinc tub with a block of ice. They lived with ten people then in a clap house, like the put on the reservations in Arizona: Too cold in winter, too hot in summer... They lived in there with ten people, plus me as a baby. When a nephew didn't do what she wanted she slapped him in the face. Aunt Louise remembers the incident clearly. It was probably that what made them leave. Dad had a good job with the railroad in Dayton. Louise never understood why he gave that up to leave Dayton. I seem to remember they went East, and ended up in Texas where fate did its work, for you as well as for me and our mother. I think our father has been a good father to Mark. He and my late husband Tony Mafia used to talk on the phone a lot. John always came across as caring, but after he and our mother split up, he too went through a rough spot for a while, till he found his way back to Dayton.  He remarried after a while and along came Mark. He writes, he has done a lot of linguistics at the university but except for his writing he didn't do much with his linguistics. No, that isn't true: he once gave me a language he had developed and which would come in handy in meeting aliens ; ).

PS: There should be a Gallagher somewhere. So maybe I am confusing the Cooper branch and the Gallaghers
Posted by Tumbleweed at 3:02 PM No comments:

Labels: genealogy..., hope and struggle for a better life, memories

After my mother passed away, my stepfather said: you can take the English books away. I took them and have in the mean time read most of them. Some are by good authors like William Burroughs, Tennessee Williams, Irwin Shaw, James Michener, Pearl Buck, Truman Capote, Larry Mac Murthy and also Louisville Saturday by Margaret Long: soldiers and lonely women, love, ecstasy and heartbreak.

The rest: trash pure and unadulterated, rather sexualized trash. But then the other day I spotted a French book by Simone de Beauvoir. I could have that one too. My mother had had a good education, has been in a French speaking boarding school, so the language didn’t surprize me. The title: La femme rompue (The torn woman). It was the youngest book among the lot. I am reading it: it is a dark and troubled book, written very intelligent. The male/female relationships are dark and troubled dissecting also mothers and daughters. (In this case posthumously)

The book portrays the loneliness of relationships that once were vibrant and fulfilling, but leaves the main characters empty handed, empty hearted. The little noises of others being unpalatable and the loneliness unbearable. The main female character at the end can’t write as well as she could. There is lot of silence in the book, uncomfortable silence that is. Every relationship turns into a disappointment and thus loneliness settles deep in the soul. Silence in the conversations, which are not really an exchange, which leave one empty broken. I wonder how broken her spirit was, to the point of dementia. To the point of no return: terminal dementia.

High expectations of oneself do not come true in the book which kind of breaks, brings someone down. Why did she buy and read that book? She must have expected more from life, but with my stepfather she choose the safe road for her, although not for me. It is an intelligent book – what one would expect from Simone De Beauvoir. In nature once in while there is solace to be found and solitude. Yet in her life there is also too much solitude. My mother was a good-looking woman. And she could hold her drink. Men were drawn to her. She met Louis at the Century hotel where she worked as a telephone operator and he as an electrician.
Posted by Tumbleweed at 5:53 PM No comments: