ARIZONA CARRIES OUT USA’S 1300TH EXECUTION
Sammy Lopez was executed in the US state of Arizona on 27 June for a murder committed in 1986. Samuel Villegas Lopez (known as Sammy Lopez) was sentenced to death for the murder in October 1986 of Estefana Holmes, a 59-year-old woman. The details of the defendant’s background of extreme poverty and severe childhood abuse and its effects on him were not presented to the sentencing judge, either at the 1987 trial or at the 1990 re-sentencing.

The execution reportedly ended at 10:37am, about 40 minutes after the lethal injection process began with the insertion of intravenous tubes into the condemned man’s veins.

This was the 23rd execution in the USA this year, and the 1300th since the USA resumed judicial killing in 1977. Arizona has carried out 32 of these executions, four of them this year.
Name: Samuel Villegas Lopez (m)
Issue(s): Death penalty

I signed the petition not to execute Troy Davis and also for Samuel Villegas Lopez. The death penalty is contrary to the right to life. It is an affront to human rights. No democracy should have capital punishment as a normal means of dealing with convicted felons. It is sad to state that the convictions to death penalty are riddled by all kinds of ills: human error, economic or racial bias. Since I am a part time resident of Arizona, I feel the need to speak out, because this execution was not carried out in my name. It is my ethical obligation to speak out against the death penalty.
A figure to make us think: with 1300 death penalties since 1973, 138 people have afterwards been exonerated: that is over 10 percent of the executions. That is an inadmissible margin of error.
For claiming to be a civilized and democratic country the USA is one of the five most executing nations. We should be the 140th nation to end executions. Stop capital punishment now.

There now over 3200 people on death row. With the above said margin of error that would constitute over 330 innocents: to me that is mass murder. End capital punishment, now.
Posted by Tumbleweed at 12:11 PM No comments: 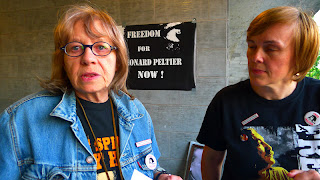 Uncyia and Hakate are the heart and soul of this Leonard Peltier chapter. They work relentlessly convincing more and people that Leonard indeed is innocent: showing informative documentaries about the incident at Oglala, poetry by Native American activist authors read in translation and now this gathering to commemorate the long time Peltier spend in jail.

After the first people arrived, they waited for late comers and a tumbleweed ending up under the wrong bridge.

The demonstration started with a silent smudge ceremony, clearing our minds and our hearts.

There were banners and people of all persuasions passing by showed interest. Information sheets were handed out to the people eating on the terraces of a more than excellent fish restaurant. The bond among the participants was strengthened once again as was the commitment to work for justice for all.

The names of 57 AIM supporters or AIM members killed by GOONS or in the presence of the  FBI or by FBI agents have been read out mentioning the place and circumstances under which they were murdered. These names were read out in many places all over he world.

We AIM not to please
by Dennis Banks

They call us the New Indians.
Hell, we are the Old Indians,
the landlords of this continent,
coming to collect the rent. 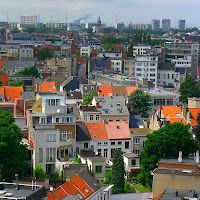 Living in a high rise, yet not on a rooftop, I tend to look out of the windows a lot. Since a couple of month I have noted a definite change in the city. From my vantage point I spotted at least four buildings where an extra apartment is added on the roof. If they aren't creating new living quarters, people have turned their roof into an urban garden or have installed solar panels. 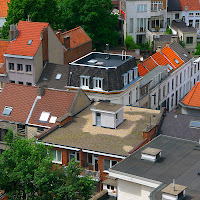 Here, on the left, you see a new apartment under construction and behind it on the slanted tiled roof, new solar panels. The small dark gray corner top apartment is brand new and is offered to students as a good place to stay. This tells me that in an urban setting people will create gardens, green refuges or overflowing balconies where ever they can and also that the price of land is so exorbitant that it is cheaper to just add an extra floor. Interesting what one sees from a it higher up.
Posted by Tumbleweed at 2:41 PM 1 comment: 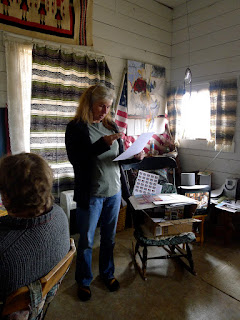 Here you see Dori Vaughn who works in a school as an interpreter/ educational assistant for children who cannot hear, practicing on a text of a poem. When I asked her whether she could sign some poems, she hesitated a moment and said yes. Signing is interpreting. American Sign Language (ASL) is not “English”. So she practiced while I spoke the text and she looked for the best rendering of the image or the concept. She also practiced ‘off the page’. Working from a written text is a job not many interpreters like to do, and poetic language of course is an extra challenge. She also discussed the content of the poem, what I had meant, how it came about. I however wanted to know how she read the poems, because a poem once written, is read and interpreted by the reader and might carry a different weight or connotation. Here you can see that Dori did a great job and added to the beauty of the event of April 30, 2012: desert poetry night.
Posted by Tumbleweed at 9:50 AM No comments:

Occupy in Utrecht The Netherlands and Kingman, Arizona

During a trip to Utrecht we talked to the people from Occupy Utrecht. Well organized, fun and committed.Lots of music and fun, but also discussions and planning for the next events was the fare of the day.

But then there is also Kingman, in extremely republican Arizona. The 99% supporters gather each Saturday at the train in the Park along the historic Route 66.

Here the group was rather small on the hot Saturday morning, yet it was a pleasant crowd talking about topical issues and the upcoming presidential elections. So On Sundays they have a peace vigil on a different location and on Wednesdays they have a gathering to suppport women's reproductive rights which are under thread because of republican inititatives.
A lot of work needs to be done, the grass roots in America are waking up and growing. We are the 99% working for better futures.


Posted by Tumbleweed at 9:56 AM No comments: