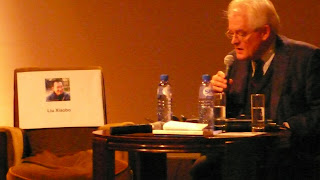 Liu Xiaobo Chinese defender of human rights, condemned to 11 years of imprisonment for exercising his right to free speech has received the Peace Nobel Prize. Here a picture of one of last years actions in support of imprisoned writers. See the empty chair of Liu Xiaobo and then Pen Flanders President Geert Van Istendaal.
sms:foto duisburg/rhein 2009

In The Small Festival of European Art of Poetry five members of a Writers in Prison Committee were involved (16-18 of September in Antwerp). There was an empty chair on stage for Chinese author Zheng Yichun and all writers in prison because of writing what they felt they must. Link to Pen. 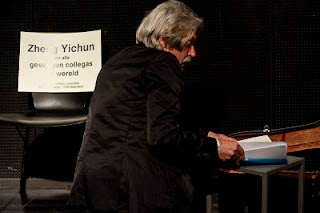 Here you see Job Degenaar President if WIPC Netherlands preparing for the finale of the Festival with the chair and poster in the backgroud.