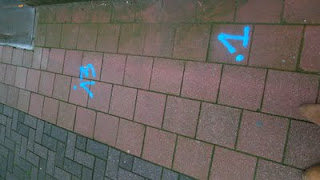 The other night  my blind and almost deaf griffon was restless, barked. I checked things out and found nothing amiss. I remained unaware of the events developing around the building.
A former psychiatric patient, know by the courts and the police (among others for shoplifting) ran amok, brandishing according to eyewitnesses, two revolvers and a machine gun... Shots rang out. 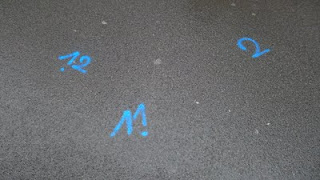 The police responded... The other man finally shot a policeman in the leg. His colleagues replied in kind and shot the perpetrator in the leg so that he couldn't cause more harm. How did the poor man get his small arsenal with the strict gun laws. I guess the street provides.

50 shots in all where fired, right across these venerable old houses...
Obviously every one tells me their story, obviously some people were shaken since some visiting friends upon leaving the building got caught up in the situation. I's like Chicago here. It seems we're living in a high end ghetto, my neighbors commented.
The picture I didn't take was where the blood still is coloring the sidewalk, not withstanding  a night with pouring rain.
Posted by Tumbleweed at 10:21 AM