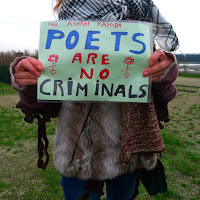 At two O'clock Sunday the 20th of December in Antwerp, Pen-Flanders together with "Heart over Hard" organized a meeting "Free Ashraf Fayad". Sven chose the location which was highly symbolic, just next to the land where the Saudi family wants to build a new dock. Some people say: great, work and jobs and lots of money they are spending on the building. Others say: Why don't we build it ourselves and not be beholden to them. 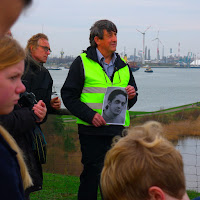 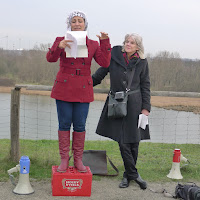 When writers organize an action, one can expect creative approach: 14 poets each read part of a poem by Ashraf Fayad: The mustache of Frida Kahlo. Fatena Al-Gorrha and Sven Cooremans worked together and the result was a great translation in Dutch. Sven, by the way was the main organizer of the event. About 75 people participated in the brisk wind. Musicians warmed up the atmosphere on accordion and on sax... Joke Van Leeuwen, president of PEN-Flanders, held a strong speech about freedom of expression. Didi De Paris had send a Rock and Roll text which Sven read and we all repeated with a loud voice. Reading Ashraf poem was very moving. For these words he has been thrown in jail and sentenced to thousand beatings with a stick. Another solemn moment was the telephone call to Ashraf's sister. It is good to feel a world wide solidarity and to be part of it. By the way Ashraf didn't write political poems. Guess what he wrote and is being punished for... love poems. I don't understand that.