Genocide of the mind 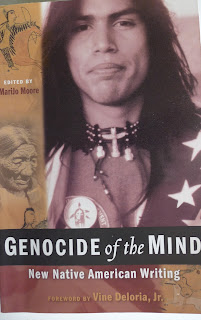 This book is a must read for people who want to hear authentic voices reflecting about the contemporary position of Native Americans in the USA. It is still a sad state of affairs, yet it is also a book that will give strength by the examples these authors give in their conduct and their writing. The book is edited by MariJo Moore and has a foreword by Vine Deloria, Jr. Thirty four authors, some I knew and admired already and many authors new to me, writing with a depth and honesty and humor and also with anger. The words are being revolutionized. David Seals message was serious, yet I smiled because of the mastery of the language. Leonard Peltier is mentioned a few times in the book. It was a joy to discover poems by Maurice Kenny, poems I didn’t know. Vine Deloria, Jr reminds us that the villages always are the center of ceremony and that the people living in town live among the representation of the values of the dominant culture. The book offers us a collective memory of these authors. I was moved by the description of the feeling of leading a discontinuous life, the sense of not belonging. I also admire the essay by Paula Gunn Allen. She seems to suggest that openness and honesty will help to explore the similarities and differences in perceiving the world. Lesly Marmon Silko, another favorite author of mine, reminds us that identity is always in flux. Wonderful to see it stated this way. The book consists of five chapters: One: Keeping the home fires burning in urban circles. Two: Young American Indians: The need to reclaim identity. Three: Native Languages: Where will they go from here? Four: Indians as mascots: An issue to be resolved. Five: Who we are, Who we are not: Memories, misconceptions, and modifications.
I do apologize for not mentioning each and every one of the authors. They are discoveries and I’ll watch out for more of their work.
Posted by Tumbleweed at 3:33 PM