From behind the scene 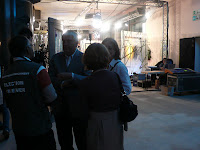 There have been European elections in the 27 member states of the European Union. In some countries that fact got snowed under by the results of the simultaneous local elections. Not here.
It is a joy to see election observers from the ACP countries' Pan African Parliament. 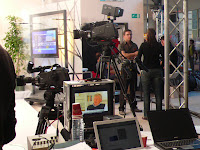 Cameras in place, interview spaces organized to tune into Europe, on
offer for the citizens and the networks were the results in pie charts, in bars or as rolling figures. 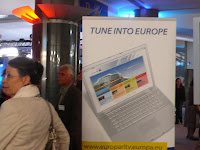 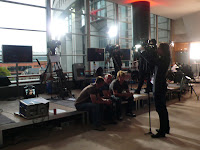 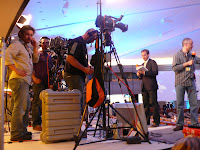 There was also a roving reporter who would grab anybody who was willing to speak to him... Thus camera men running, lugging their equipment around. 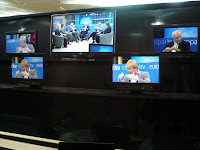 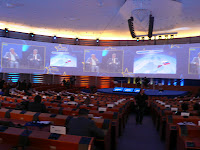 There is still a pro-European majority yet except for the Greens the progressive forces in Europe received a harsh beating. The stronghold of the right fringe (not in figures alas) is composed of populist, xenophobe and anti-Islam and anti-European forces. There some joy at the victory of the conservative European People's Party and a lot of sadness and pain among those who lost and kind of lost hope. Europe wakes up a less friendly place.
These are some the images you might have seen...
Posted by Tumbleweed at 9:58 AM