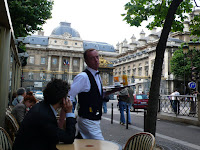 A petit café with a view of the sumptuous, awe-inspiring and overpowering Palais de Justice. In the Appelate Court, there was a case involving two young men. First, the judge laid out the facts as they appear from the file, seemingly neutral. He also questioned the two youngsters. Then the lawyer for the victim (3 policemen) spoke, then the Public Prosecutor. Both painted a harsh picture of the facts. Then it was the turn of the two lawyers defending the handbagsnatcher and the cardriver. The layers of meaning, the nuance in facts, the illusive truth. It could be a judgement error, a one-off situation, an initiation, a mistake, an intentional act aiming to drive into the policemen, a non-violent theft and a botched get-away. The street it happened on is one of the grand Boulevards with greenery and with policemen guarding some embassies. I have been walking it twice a day for almost two weeks. I try to immagine it at night, alone, my bag being taken, would I peruse the thief like the lady did? The court retired. We'll never know wetther the non-violent handbag thief will have to go to jail for 24 month or will be liberated. We'll never know whether the driver was blinded by the roadblock and didn't see the policemen or wether he tried to flee and accidently hit one of them. What is the truth? How do we establish it? How then do we behave humanely towards all involved?
Posted by Tumbleweed at 8:59 PM