Quiche and crumble at the WIPC 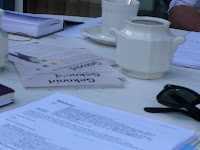 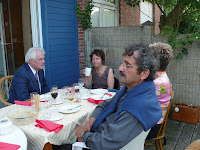 It is the time of year that the members of the Writers in Prison Committee are invited in summers garden of one of the members.
First the general meeting in Oslo of the Pen was discussed. That entails showing what WIPCs in other regions have done. 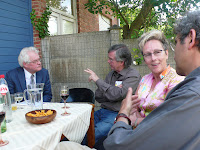 A Scottish initiative is a board game about the freedom of expression. 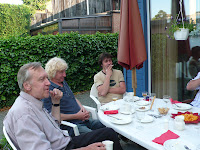 There are tendencies to exclude religious defamation from the Freedom of expression. One of the new projects is to go to secondary schools (high school) and speak after ample preparation of the students about the subject. Working interactively is smaller classes is an option and talking about one specific author and why what happened to him where could be another approach. After a while two guests of WIPC of the board of Pen joined us: Zeki Ergas, secretary general of Pen of 'Suisse Romande', (the French speaking Swiss) and active for the Writers for Peace Committee and the International Secretary Eugene Schoulgin, who witnessed many trials of accused writers. The food was delicious, the discussion nourishing.
Posted by Tumbleweed at 5:11 PM