The first song of the CMA Awards Music Week in Nashville, TN

The start of the CMA Awards Festivities was at the Plaza of the Grand Ole Oprey. The first song was by Thomas Rhett: Something to do with my hands. Strong, compact, interesting lyrics was what he offered in the four songs to warm up the public. Rhett, singer, songwriter also performed: I don't know where I am going with this and What have you got in that cup  and Tobacco. A worthy start to a week of of high quality country and mountain music. His act was followed  by the auction of a guitar signed by many artists. It sold for 925 $. The proceeds go to helping Country artists who need it.
The main act Jerrod Niemann was as good and strong, pleasing the crowd enormously. His band had a few mean guitar players, one made the guitar sound like a violin... 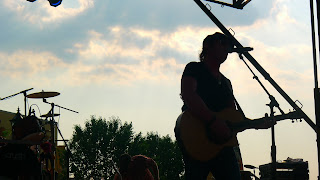 Jerrod sang songs most fans in the crowd knew how to sing without any help. Good traditional songs, love and loss and gentle naughtiness. All in a positive way: A is for Alcohol, B is for beer, C for Mrs Carter, sleeping here... Good vibes were send out by Thomas Rhett and the star with a liberal stanze that Jarrod now is. 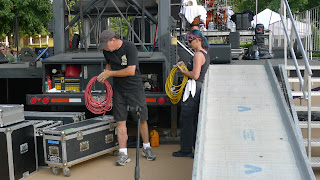 Without roadies, nothing goes. So lets salute these workers, before and after the performances. 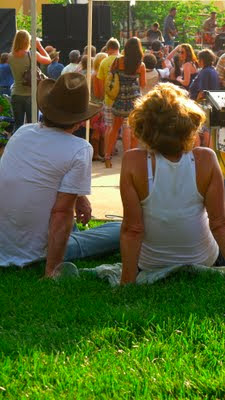 And also the crowd has to be saluted, in their Country garb and attitudes. The music week has started in a pleasant way on a hot an sultry day in Nashville Tennessee.
500.000 Country Music fans are expected in Nashville:Enjoy, live the atmosphere.
Posted by Tumbleweed at 3:49 AM