The West lives on 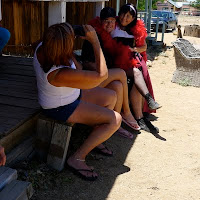 What to say: the man got caught red-handed on film and it is his wife filming him fooling around with a floozy.
In this picture she turned bounty-hunter and doesn't wait to shoot, nor to collect the money from the sheriff.
The troupe, missing four actors reshuffled and redistributed roles and put up a fun performance.

In these small western towns one finds often Western Reenactment Groups, partially because they are history buffs, or also because it is just a good thing to do to create friendships and a sense of community over the generations. Special in the Longcoats and Lace is that a bit of background on the past is given as an introduction to the skids. The new actor had a hard start: he was shot in each one of the scenes... 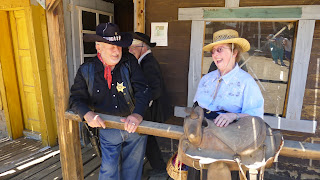 The smiling Lady had her 80th birthday and still a dangerous schoolmarm.
Tradition and black powder... in Chloride, AZ there are even two troops.
Posted by Tumbleweed at 4:58 AM