The gathering for Leonard Peltier

It was one of those miserably cold days when five layers of clothes can't  keep you warm. It was a winter day like I imagine winters to be in South Dakota. Yet a motley crew of supporters toughed it out for three hours, thinking about Leonard Peltier, talking, drumming, playing the flute, handing out information, sharing hot chocolate with nearby beggars.

Hakata and Uncyia organized this vigil and demonstration across from the US Embassy. In front of the embassy is impossible since that is American territory. I was impressed by the courteous and discrete manner of the Brussels police. 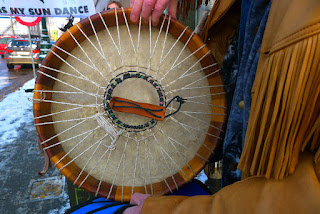 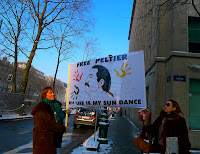 There were banners and flags, tracks were handed out to shoppers in the center of Brussels and with some we had lengthy conversations. A tip for the Ambassador: so one knows what people really think. The sympathy clearly was for the liberation of Leonard Peltier. 36 years of imprisonment is deemed illegal in Belgium, said one of the people we talked to. 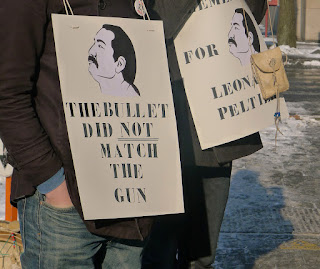 The last ones standing, quietly after everything was cleaned up and the the last drummer was tucking away his drums. 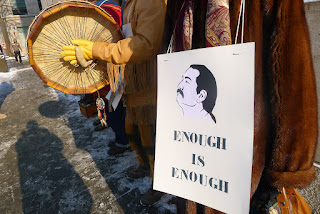 Yes 36 years since his arrest, followed by a trial with dubious practices, considered by many a miscarriage of justice.
So enough is enough: Free Leonard Peltier.
Posted by Tumbleweed at 10:41 AM