Again an auction of Hopi Katsinam Friends in France 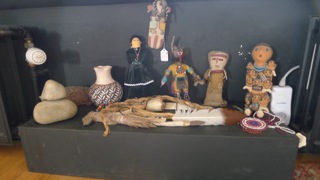 Last time, at the second auction we all tried to have the sales forbidden: but the French courts decided differently. It was a sad day and the guards at the auction house were over bearing and intimidating. The auction master had no respect in handling and speaking about the katsinam.
The main point is, that the objects in the auction are sacred, ceremonial objects. They have power. They are not tourist pieces. My small shrine I have  does not hold ceremonial pieces. Just pieces that bring me joy and remind me of the beauty of Hopi ceremony and the way of life of the Hopi.
Posted by Tumbleweed at 6:36 PM