Lighthouse and Traces have arrived 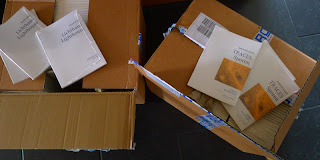 Two books for the presentation on March 23rd in De Zwarte Panter in Antwerp (8 PM) have arrived Roger Nupie's Lighthouse* Lichthaus was the first to come out of the crate. The title of the book refers to the novel of Virginia Woolf, just as the moving poem The waves. His poetry presented here is solemn, speaking of missing and longing. In the cycle  Her handwriting he remembers his grandmother kindly with the deep love of  grandson. Roger Nupie questions conventions in Self portrait, is playful and explicitly erotic in several poems, a.o. in Olivette. Yet he also challenges conventions in his self-portrait, no longer fulfilling the romantic image of a poet, but also in two poems about war and its consequences. The German translation is by Fred Schywek and the English by Annmarie Sauer. The translations are always proofread with the authors who authorize  them.